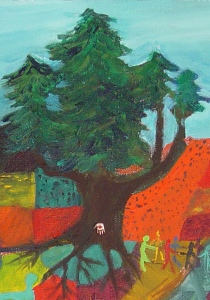 Owen had never known how to describe the giant Sitka Spruce before him well up in the Logan Family Forest, across the highway from most of the houses in the north end of the community. Always he was filled with awe at the powerful presence of THIS GREAT-GREAT GRANDMOTHER OF THE FOREST. The roots and branches – even those several stories above – were themselves the size of most large trees. The ferns growing way up overhead on her thick branches were the size of a VW bug. She was like an elephant, or rather, a whole tower of elephants. Huge legs. Massive body. One could almost see her wise eyes beaming and sense her enormous beating heart…. Yet, none of these images sufficed to express the power of her physical presence. The reverence she engendered was as boggling as a giant cathedral. Her connection to All That Is…. An ancient, gigantic force….

As kids he and Gordy had climbed into those branches. He could still see the frayed ends of the ropes they’d used to pull themselves up, ropes probably strung by their father and his brothers. They had even spent the night there on occasion, but it had always been spooky somehow and by the time they were teenagers Gordy had become disinclined for that particular adventure. Owen had continued on solo for a few years but his dreams while there had become disturbing, and soon his travels away from the community meant that he too left the Sitka behind.

Since his return twenty-five years ago, he hadn’t neglected the tree entirely, but he came up rarely and not to spend the night. The Medicine Groups held ceremony here from time to time. It took at least a dozen people, hands outstretched, to reach around it. He’d also brought Robin and the Illahee children over the years, but he’d been disinclined to share the place with many. It was too special.

He wasn’t quite sure why he had chosen this particular evening, but he sensed that September’s Equinox Labyrinth had woken something in him. Ever since then he’d been feeling a strong call to journey inward, to spend a night in deep listening to the Tree and the forest as a whole.

Owen settled into a soft mossy place in the crook of the Grandmother Sitka’s mammoth roots. He could feel the tree embracing him, loving him. It was almost as if she was congratulating him on following his inclination to choose this spot on this night. “OK, I’ll take that affirmation,” he whispered.

His thoughts as he centered in were full of Daniel Giamario’s Shamanic Astrology idea Pia had talked about the other night in the Medicine Circle – how Rising Signs are what we are here to learn this time around, while Moon Signs are the expertise we bring into the world from former lives. His own Cancer Moon explained his innate ability to care for others, his mothering of Robin after his wife’s death, and even his strong on-going connection at Illahee, both to the group as a whole and to the some of the needier children there. It was so easy for him to reach them through nature. Kids that were having trouble reading, especially those coming discouraged from other schools, thrived when Illahee got them out in the woods. Finding a newt or an animal skull could spur an interest in looking it up and it didn’t take much nudging for a drawing and eventually a little writing about it…. He knew he was also inclined to be something of a worrying mother hen. Maybe that was the shadow side of his Cancerian expertise. His Libra Sun gave him balance, but he could get fretful especially about details and young people.

His mind’s eye flickered over times when he’d been overly fussy about the children’s safety. It was hard to listen to Celeste’s sage advice that huge learning leaps often occurred right after a kid had climbed high in a tree or scaled a rocky incline. It seemed that mastering a physical challenge often meant immediate advancement of an elusive academic skill. Brain-mind connections. Somatic learning. Illogically, he still fretted even knowing his own and his brother’s tree born adventures, perhaps because of those escapades.

His Scorpio rising sign was intimidating. A wizard? He didn’t think so. Although lately the Green Man archetype had been moving him almost to tears. Green Man. Pan. That wild ultra-masculine forest being, the uncontrollable aspects of Nature – floods, typhoons, lightening-set fires. Spring growth. Procreation. Rampant sex.

Owen grinned. It was hard to imagine that part of himself going wild. What would a goatish rampage look like in a sensitive widower tuned into children and plants? Unpartnered too. No easy outlet there. He’d certainly never felt like casual encounters. Was there somebody to play Green Woman to his Green Man self? Goldberry to his Tom Bombadil? For a minute he wallowed in a longing he rarely admitted to himself. He loved Tolkien’s image of the cozy, wooded cottage and imagined a Northwest American version with Tom’s magical appearances here and there to spur the furious growth of a coastal spring and summer – blackberries and Old-Man-in-the-Ground, those vine beings that curled relentlessly, reaching for sun and nutrients. Butterflies. Bees. Pollen. Sex.

Yet right now was the opposite season. The dying back. At sixty-four, his life matched this October season. He listened to a couple of raccoons chittering in the distance, almost a quarrel, but not quite. The bats swooped low. The full moon was hidden at the moment but its silvery light gave an eeriness to the density of the forest. Suddenly he felt a little spooked. All alone in the woods…. on the Mountain…. He could almost hear a hummm, a low throb of the life within the Mountain. He’d forgotten about that pulse. Hadn’t heard it for a while….

He opened the thermos of tea he’d packed. Chamomile, catnip and salal from his garden to ground and calm, with a pinch of lobelia to heighten his sense of adventure, but also to help with any lingering PTSD upwellings. He’d tossed some motherwort in too – its scientific name, Leonuris cardiaca, lionhearted, speaking to courage in transitions which is what he was really asking for. His Libra self liked the balance of all those opposites. An aventurine stone was in his coat pocket. He used to think it was “adventurine” with a “d” but had recently learned that it was about growth, especially opening and clearing the heart chakra which he figured also means it’s about courage for making shifts. “Coeur” meaning “heart” in French.

Leaning back he settled the orange and brown Peruvian woven wool blankets he’d brought a little more comfortably behind and under him, his thoughts drifting to more prosaic topics. His upcoming conversation with Gordy about finances was sure to be unpleasant. An article to be written for the Conservancy Trust newsletter about making peace with invasive species. His nagging question about the importance of Devil’s Club…. He looked towards the stand of Devil’s Club he knew was just outside this clearing, but it was now too dark to distinguish one plant from another. This would be a good place to Journey with it….

Held in the arms of the Great Grandmother Sitka, he mused about all the people who had come into his life since his boyhood days in Mahonia and Nekelew. He had been lonely then for others who loved this place in the way he did. So many of his growing up peers either lived here without noticing or had been set on moving away. He had left too….

The Vietnam War had been calling as he graduated from Nekelew High School and going had seemed the right thing to do. For sure he didn’t have any other options lined up for himself. He wasn’t exactly the studious type. Nor wanting to learn a trade…. The War. Now there was a topic he didn’t want to think about. These home woods were so different from the tortured jungles around Duc Pho.

On the other hand, his visit to the Amazon Basin a few years ago had been all too similar a landscape. The sensory overlap of sound and smells of the two jungles had given him flashbacks of terror in the midst of learning about traditional healing plants on Peru’s Madre de Dios River, making it a truly heroic shamanic dismemberment journey. It had felt like a blowing asunder of his body parts like his recurring flashbacks of others’ deaths and dismemberments. However, the vision medicines had shown him some clear distinctions of time and place that allowed him to make peace with the differing energies. The war was then. The medicine plants were so very NOW. The war and its aftermath had tempered rather than broken him. He had been lucky – neither physically wounded, nor so psychologically scarred that he had fallen into debilitating Post Traumatic Stress Disorder. Alcohol had been an issue, as had pot. But thanks to his higher powers for AA, he was now clear of those substances. He knew they could be sacraments, but he had overused them and they had taken over for a while. Drinking and smoking too much had worked to drown out the shrieking demons haunting him from the Asian jungle but he knew he had become too deadened to be useful to this world and his deep connection here in the temperate Oregon rainforest.

The people now in his life had shown him the possibilities of a spiritual pursuit and after the Amazon he had studied far afield with different teachers to learn about the sacred inward paths with no further need of outside hallucinogenic infusion…. Thus his thoughts led to the typical drumbeat for shamanic journeying and he began to hear it in his head….