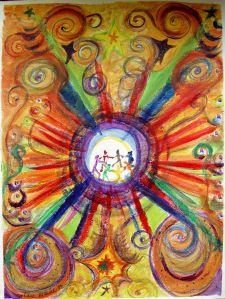 “How nice not to be putting on a nail belt or my cruddy old Phillies cap any more,” thought Charley Goodwin-Brown as he unlocked the door of Neadatagi House on Mahonia’s main street after his morning yoga class. “So many new hats these days. Am I really the guy who runs this Cedar ReSource Center and Neadatagi House in comfy sweat pants? And the guy who led an awesome Men’s Medicine Group last night where we told stories about our fathers and their influence on us? I used to be the guy with only a very minor role in helping set up conservancy and housing land trusts, as well as a local credit union. Now I’m right here in the hub of it all.” He set his heavy backpack down on the sofa in the former living room that now served as a general meeting space for the house whose name meant “Place of Cedar” in the language of the natives who once lived in the area.

It was no wonder people got confused about the crisscrossing web of groups, boards and causes Charley and his crowd were involved with. The little yellow house kitty-corner to the natural food store and across from the community center was home to several organizations and he was part-time staff to at least three of them at any one time, depending on where the funding was coming from and who else was helping on a given day either paid or volunteer. At the moment the River Valley Car Share (informally known as RCar) and the Green Fund were under his provenance, though both would soon need its own person.

“What a surprise that I am now all of those things. But I don’t do it by myself,” he assured the gray cat Fe-lion, who came out from her hidey-hole under the stairs to curl around his legs. “I have lots of help…. most days,” he amended as he saw the note from a volunteer retiree saying she would not be in until tomorrow to process the applications coming in for the Green Fund. He pulled the cat’s food out from the mini fridge, plugged in the electric teapot and chose a red handmade cup off the rack. The cedar tree etched into it always gave him a pleasing shiver and an energetic connection into the house namesake.

“I sure miss Ursula as an active teammate in all this stuff,” he grumbled, putting one of Owen Logan’s more stimulating herbal blends in the tea ball. “She was the one who wanted to get this storefront so projects in various stages of development could share staff, equipment and meeting rooms. And visibility. It was she, Molly and Pia who got the Big Grant to fund this space, buy the land next to ReBound, and start a bunch of other projects. Now she’s off with her own little store and has time to putter in the woods and wander over to the school. She won’t even be down to town for hours, especially if she walks or bikes. She’ll stop to visit with whoever she meets along the way, dispensing wise counsel. Her granny-ing as she calls it. But, hey, her networking turns up new volunteers and she is reading the draft of the big new proposal Molly and I are putting together.

“She and the other women were the visionaries,” he mused. They started the home birth network with their local midwife almost forty years ago. It was Ursula who had insisted their family join Pia and Molly in the crazy labor of love that became Illahee School for the children who were a product of the birthing network. “I was just a carpenter who’d said that the public schools had been good enough for me and they’d be good enough for my kids. Owen was always into it, but the rest of us guys were pretty skeptical, dragged along by our partners’ zealotry.” He smiled remembering the women-led meetings that were a new thing in the early 80’s. Miracles had been accomplished, one right after the other, even with nursing babies (Ursula had two at one point), hungry toddlers with short attention spans, and reluctant husbands. “They even talked us into building the schoolhouse. None of us had any money, that was for sure.”

Later it was the women who’d made the strong case about thinking globally and acting locally, rather than getting discouraged about the sorry state of the world. “They kept thrusting the Whole Earth Catalog and Rain Magazine under our noses. ‘See, we can do this too,’ Ursula would burble and Molly would say, ‘If we can do it in this one little place, then we can show others. It’s all about ripples….’”

As he sipped his tea, Charley remembered how it was Ursula who three years ago had the vision that a ritual was needed with the intention of calling new blood for the next stages of their community building. He thought back to that Spring Equinox when, exhausted and stressed by the prospect of the long haul, the spiritual activist types had spent a weekend retreat holed up at the school to wrastle with how to actualize their vision for the community’s future. Too many of them had been near burnout – whether they admitted it to themselves or not – with more ideas than could be carried out without help. Most of their own kids were scattered around the globe, though there were a number of fledglings who had taken root. Charley smiled thinking of his younger daughter Caliente and her band of farmsteaders. Surely there were retirees who were just waiting for places to put their money and energy. “If we could just clone ourselves,” Pia had often said.

To his own surprise Charley had stepped to the fore as a leader that day. He’d seemed to watch from a distance as the words came out of this mouth. “My back keeps telling me it’s time to leave carpentry to the younger guys. I want to take on more of the administrative work to get some projects going I’m passionate about like the rural car share network.

“Good!” Ursula had said. “I’ll start the store I’ve always dreamed of. I’m tired of pushing the energy. I want to take a more fluid, less bureaucratic role. I’m so done with personnel policies and IRS applications and…. and spearheading funding applications.” Taking over from her had not Charley’s intent at all, but it had felt right.

That weekend had culminated in a magical ritual to call in new blood for what most present were realizing had become their life’s work. Using the power of Spring Equinox intentionality, like seeds planted for the growing season, they had raised energy to ensure that the coming years would bring good crops, both literally and figuratively, along with many willing hands. Inspired by Starhawk’s Fifth Sacred Thing, masked representatives from the non-human world held each of the Four Directions. Raven, of course, was Raven in the East. Caliente was Fire in the South. Pia as Salmon stood in the west and Caliente’s husband, Carlos Flores, wore the green crone Mountain mask in the North. Ever mysterious Stella was Grandmother Spider weaving the Center. These beings, mostly silent, anchored the proceedings.

The rest spoke of their individual and collective needs, as well as their visions and dreams, most importantly that this place be a shining example for the future. They’d rooted their intentions with their fierce love for the place, each other, and all the beings in it. Then raising a classically witchy cone of power, with the masked Directions spontaneously whirling around them, they had flung their intentions skywards. Afterwards, everyone whooped and hollered as they felt the potent energetic Call wing its way outward.

“A new level of tangible magic has been afoot ever since,” thought Charley now, running a hand across his curly, still blond mop of hair. Amazingly within weeks Owen’s daughter Robin had moved back to help her Uncle Gordon with the Logan Family Forestry Trust. His own eldest Jay, home for the summer, had rekindled a romance with an old friend and now seemed to be taking up a career as a brewer with Pia’s son Arlo. Thea Culver appeared last spring out of nowhere. His granddaughter, Menolly…. Capable weekenders Aurora and Milo Moss decided to live here full time and were getting increasingly involved. He’d heard recently they were thinking about setting up a massage and healing school of some sort. To name just a few.

“And now Michael Di’Angeli who went to the public high school with our kids, is due here in this very space next week to open Locus, an adjunct office for Portland State’s Local Sustainability Program, paying enough rent to cover the mortgage on the building. Whoopee! The program’s interns will be a godsend – literally – for existing projects as well as those in gestation. The timing is perfect (of course) with the back room open since the Conservancy Trust’s move back out to their farm’s newly renovated milk parlor complete with office, classroom and lab space.”

With his brain now jazzed with tea and memories, and Eric Clapton’s Unplugged in the CD player, Charley turned to the tasks at hand. “Now where did I set down my backpack with my laptop and notebook? Who am I asking for money for which project today? What meetings do I need to set up? Who’s coming in? I feel like Grandmother Spider Herself or at least one of Her minions. This is fun,” he assured the cat, now cleaning her whiskers on his desk. “And I’m looking forward to that ten day silent meditation retreat next month. Not to mention, I’m thinkin’ the surf will be happenin’ this evening and maybe tomorrow morning too. Balance. It’s all about balance.”