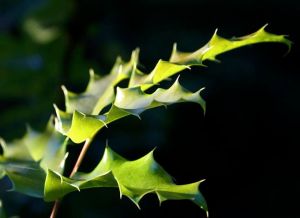 “Mahonia tells me it is about coming into True,” mused Owen Logan to himself as he moved off the main trail up the Mountain. “Like a carpenter’s sense of upright,” he said, tilting his hand back and forth slightly in his mind’s eye to create the wobble of a board out of true.

Owen was a large man so his progress was rather bearlike. He was dressed simply in a well-loved green woolen jacket and patched jeans. A grey ponytail curled from under the hand knit hat of subtle woodsy hues protecting his bald spot from the moisty mist of the September morning. He didn’t exactly blend into the forest, but he belonged somehow.

The rough elk path he was now on led to a patch of Mahonia nervosa, more commonly known as Oregon grape. He thought about the taller variety he had next to his house, Mahonia aquifolium. Though the books said otherwise, his experience told him it was difficult to say which was the more potent of the species. He loved them both with their bunched yellow spring flowers and their roots, which when scraped, yielded bright yellow shavings. Medicinally antibiotic and anti-viral, it is coastal Oregon’s goldenseal. Tinctured, it made a fine general tonic. Good for the gums too, especially gum infections. He loved to say the word “berberine” – the component that made the yellow of both plants.

Lately, however, Owen had been noticing the subtler properties of the plant. Coming into True. Finding balance. Helping one to be more truly oneself. Helping to find one’s life purpose – to find the path one was meant to be following. To pay attention to the guides that abounded if one only knew how to listen.

Owen was pretty sure he was on the right path – both literally and figuratively. He knew he was at home here on the Mountain. In fact, he had been born here and his knowledge of the plants and their properties was extensive, though he had come to that study relatively late in his 64 years. He loved it that he had fallen in love with Oregon grape before knowing that its Latin name was the same as his village by the ocean – Mahonia. Synchronicity, indeed.

He used to fret that there was no way to learn all that the Old Ones of this place must have known about their habitat. So much was lost when the natives died off. He had only been slightly comforted by something a medicine woman of the Siletz Tribe told him in an herb workshop a few years ago when he spoke this concern. “Listen to the wind and to the plants themselves,” she had said. “They will tell you what you need to know.”

At the time he hadn’t really understood what she meant, and assumed it was no more than a metaphor. But recently he had been consciously communing with the plants and they had begun to tell him their secrets. He now knew they had so much more to gift than the synergy of mere chemicals even in their most natural state.

Today he was heading for a patch of Mahonia nervosa that was tucked in among the Sitka spruce, hemlock and bushy salal on the south face of the Mountain. He’d brought his digging fork because he wanted to transplant a little of it, to try once again to grow it in the woods of his own home further down the mountain. Perhaps he hadn’t asked it properly the other times or maybe the spot he’d chosen hadn’t been to its liking. What did it take to get it to flourish removed from its siblings’ roots?

There – spread out like it was planted, the conditions of sunlight and slope perfect. It grows so slowly, its spread isn’t very far. Is it because the big trees shade it on either side? He moved gently through to sit in the middle. To pay homage.

“Mahonia, most sacred plant to me, thank you for your presence in my life,” he said out loud as he poured a libation from his water bottle on the plants. It was Mountain water that he gathered from the spring up the road from his house. “May I take a little of you to have close at hand? I think you will like growing in my yard at the bottom of the Mountain. My friends and community have need of your wisdom and presence closer to their homes.”

He listened quietly to the subtle sense that this plant and this one, but not that one, were willing to make the journey down with him to gift their power to the people of this place. Indeed, Owen got the sense that they were thanking him for paying attention and honoring him for it. “It has been a long time,” he heard as a whisper in his mind. Owen expressed his gratitude again and wrapping his gleanings in the newspaper he’d brought, added them to the clutter in his frayed green backpack.

Hey…. Was that a coyote he saw out of the corner of his eye? He mentally saluted that local Trickster who had now passed behind an ancient cedar stump.

Clambering back to the main trail by a slightly different route he wiped a sticky spider web off his graying beard. “Forgive my intrusion, Grandmother.” Off he went, down the Mountain, back to the town of Mahonia that was the center of his world.